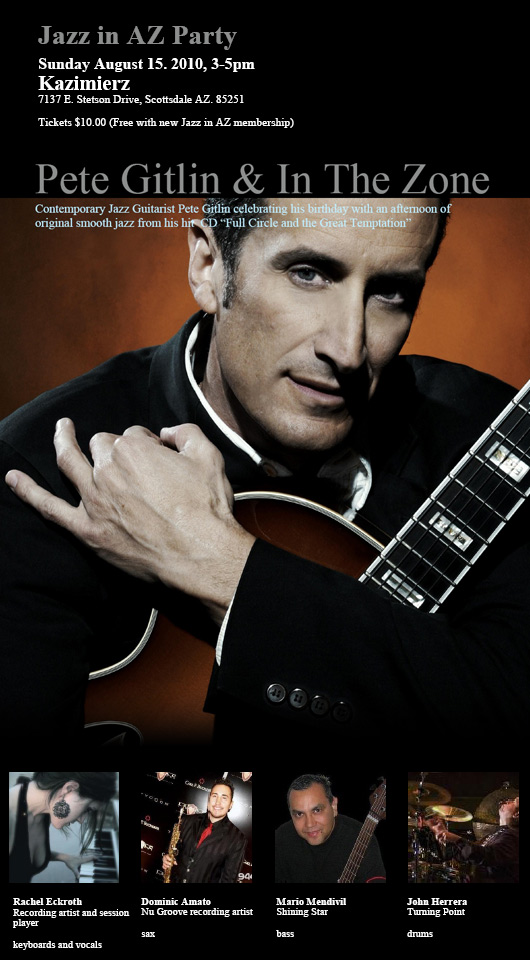 It was an eventful Sunday afternoon.  I had planned to attend a concert of Pete Gitlin’s in the afternoon, and was wringing my hands as to how to do it, with my poverty level being official.   Before listening to an interview on Talking Smooth Jazz with Shilts and Patrick Yandall, I decided I would get ready, and find a way to make it to Scottsdale.  It was my duty, I thought, people will want to know about it! I washed my hair, attempted to style it while running late, and I rushed out of my place.

Seeing as to how I live on the other side of town, and it was nearly 3 o’clock, when the gig was to start, I was anxious.  I went with the flow of traffic on the freeway (a.k.a. crazy- fast) and made it to Scottsdale at 3:15!  I had seen the venue, Kazimierz Wine Bar before, but of course, while I am nervous and in a rush, I’m circling the block, trying to remember where it is!  I finally decide to park, and start walking until I find it. I could hear the melodius sound even from the outside.  I walk in, alone, wondering where I will park myself, when I hear someone call my name.  I’m thinking “no one knows me here, or do they?” (cue creepy music–ooh wee oooooh).  I look down a dimly lit aisle, and who is it but Colleen Spencer, from Smooth Groove Phoenix!  Coco, in the flesh!  She has to be fabulous; Brian O’Neal wrote a song for her!  We hug, then she asks if I will join their table.  I’m thinking, whew, that’s a relief, and joyfully accept. 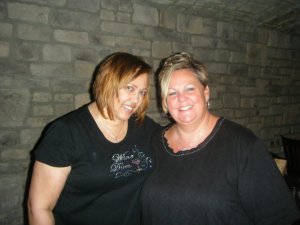 I paid my $10.00 cover, and had the nerve to order a glass of wine, praying that it would not be over $10.00!!  Before settling in my seat, I see Ronald Holloway, the man who makes the Jazz scene happen in Phoenix these days, Program Director of Smooth Groove Phoenix. I put my hand out to shake his, then think, what the heck, we’ve already met many times, so I go in for the hug.  He scolds me for even trying to shake.  He escorts me to my seat, and then disappears, no doubt to talk business with the Jazz in AZ folks.   I was lucky to meet Colleen’s sister, Carolyn, at the table, and she kept me engaged in the action.

We are on the side of the band, in “the grotto” area, which was nice and cool, on a day that was supposed to top 113F.  I see Pete Gitlin.  He is a tall, thin gentleman, and he is playing his guitar like he is having a ball!  It sounded so NICE!  I see the rest of his band, most of whom I have had the pleasure of hearing before: John Herrera, Mario Mendival, Rachel Eckroth and Dominic Amato.  Dominic, Dominic..that man can BLOW!

We are blessed to have him in our area, and he is certainly a gifted artist.  Mario at Bass is always a pleasure to hear!  Rachel….she used to sit in with the band at Voce when I went to see Marion Meadows.  Rachel is a beautiful, nice, quiet looking woman, who does NOT look like she is gonna break out on the keyboard like she DOES!  She–(pardon the expression) kicks ASS!  I can’t even describe her talent, but suffice it to say, you would not expect a sound like that to come from this phenomenal woman!

Pete is a great Guitarist, and a fantastic host as well.  He looks comfortable at the microphone, and he gives his fellow musicians their time to shine.  It wasn’t all about him, it was a band effort. I really admired that.  The band took a break, and I decided to say hi to Dominic and look to  find Melissa Sharpe, our on-air personality on KYOT.   Dominic said “hey, my Facebook friend!” as I’m known to all, and I told him how he was jamming.   I made my way over to Melissa, who had come in after hosting the “Smooth Jazz Sunday Brunch” to watch Pete perform. I was startled to see that it was Pete who was talking with her!  I hugged Melissa, and she introduced me to Pete.  He too, recognized me from Facebook.  He gave me a hearty hug, and of course, that made him the Man from then on in my eyes. Little did Pete realize that it was his inbox message to me, saying he hoped to see me at the gig, that was the determining factor for my being there.  He probably went to each person who RSVP’d and  personally invited them.  It’s that closeness, that personal touch, that endears us to so many artists.  And it made a big difference to me.

The second set began, and Pete was groovin’.  I don’t think that my head stayed still the whole afternoon, it was bopping with the music.  How can you not “Get Funk-ified”?  He explained the title of his song, “B Serious” was based on the key of  B, as well as the inspiration behind his song “Jennette”.  One of Pete’s songs even started the tears welling in someones eyes (they will remain nameless).

After the final set, Pete gave accolades to the band and thanked us all for attending.  I asked Coco if she had met Pete or Dominic yet, and she told me no, but that I was gonna introduce them!  I have to laugh at this, because when I was younger, I would have NEVER had the boldness that I now seem to possess.  Pete had announced that Dominic was from Detroit, my hometown, so I had to quiz him on that after the set!  He was surprised to find that was my home base, too.  I introduced him to Colleen, and we were fortunate enough to take the photo with him.  While they talked, I went over to Rachel to tell her how awesome I think she is.  She remembered me from Voce, and I told her that I will try to make her local gigs in the very near future.  I also let her know that I tell everyone around that she is one baaaaad lady!  While the group take a photo with Rachel, I speak with Mario who says “My Facebook friend!”  Okay, okay my Facebook addiction is readily apparent now!

I spirit Coco over to where Pete is taking photos with others, and we wait patiently for our turn.  While they had a camera mishap, I introduced them and we take a quick photo with Pete.  He actually knows that he closed his eyes in the photo, and he asks Carolyn to take another, which she does.

Pete give us the biggest hugs, and we thank him for a wonderful time.  Really, what is better than a Sunday afternoon, shaded from the heat, a glass of wine, and the songs of Pete Gitlin.  Check him out, you will enjoy him, I promise!  Thanks to Richard Edwards, of SmoothGrooves out of Gloucester, England for playing Pete’s song and introducing me to his music.

This entry was posted in Contemporary Jazz, Music, Smooth Jazz.

One thought on “Pete Gitlin “Git’s” It”

My Dearest Lory,
Wow, what a great Blog write up and such an honor to be a part of it. I had a Great time hanging with you. What made it so special is the fact that there is nothing better than getting to do so with someone else that has the same passion as you do. It is no fun to go to such an Event where the person is not into the music or is not a music Lover. You have a great personality and are so Real & down to earth, I love that about you. I can see us being friends for many years to come.

This was my first time seeing Pete, Dominic, Rachel, John & Mario Live. There is nothing like Live Music. Everything that Lory stated in her Blog is right on the Money. I could not of said it better myself. Thank you girl for putting your time into writing this. It is so heart felt. I know if I appreciated it the Artist did as well. It was so wonderful to meet everyone, well everyone but Mario of whom I did not get to meet but will look to do so in the future.

I’m glad I caught you walking through the door Lory. The door opened and a new friendship formed. Thank God for Facebook and for the Artist being pro-active and reaching out to their fans as it is true, when they do reach out it gives us a feeling of being connected & therefore we want to be a part of that connection so it brings us all together & the main goal is to keep the Live Music Alive!!!!!! Can’t wait to get together again. Thank you to everyone, to Beth Dore & Jazz in AZ and to my Business Partners, Tank Davis & Thomas Brown aka Downtown from Smooth Groove Phoenix & Valley of the Sun Entertainment. PS: It was great to see you again Melissa Sharp!!! Look forward to seeing you and everyone again soon.

Music Speaks of My Heart…… Coco